Department of Information Engineering and Mathematics, University of Siena, Italy 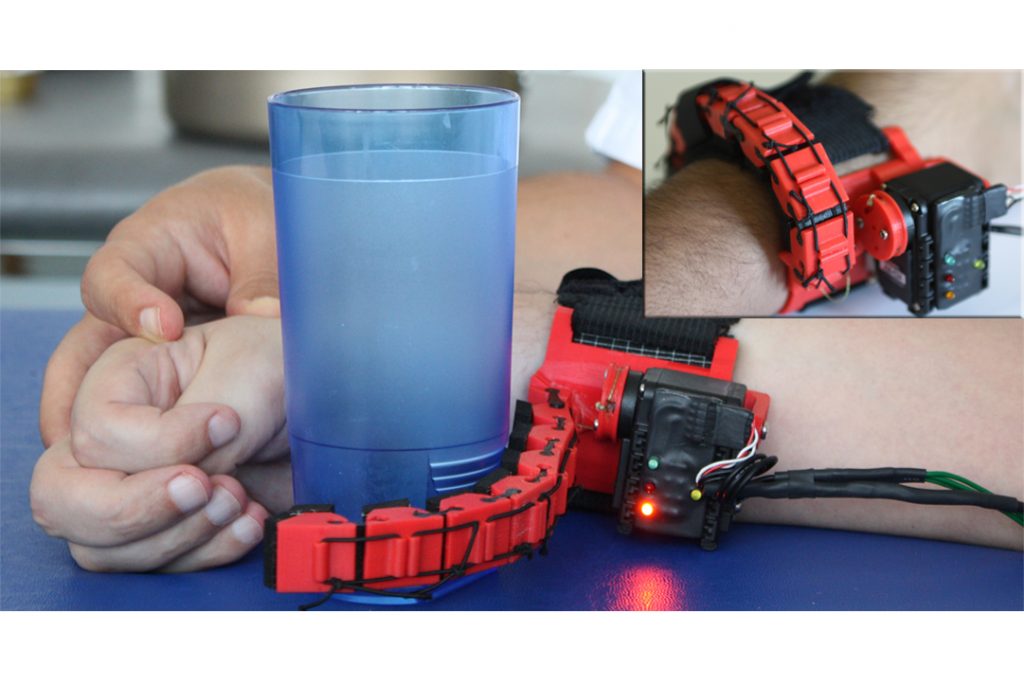 This website summarizes our research on wearable extra fingers and the evolution of the Robotic Sixth Finger.

In our recent work [10], we presented the Soft-SixthFinger, a wearable robotic extra-finger designed to be used by chronic stroke patients to compensate for the missing hand function of their paretic limb. The patient can control the flexion/extension of the robotic finger through the eCap, an Electromyography (EMG) interface embedded in a cap. The user can control the device contracting the frontalis muscle by moving his or her eyebrows upwards. The Soft-SixthFinger has been designed as tool that can be used by chronic stroke patients to compensate for grasping in many Activities of Daily Living (ADL). It can be wrapped around the wrist and worn as a bracelet when not used. The light weight and the complete wireless connection with the EMG interface guarantee a high portability and wearability. We tested the device with qualitative experiments involving six chronic stroke patients. Results show that the proposed system significantly improves the performance of the considered tests and the autonomy in ADL. A video is available here. 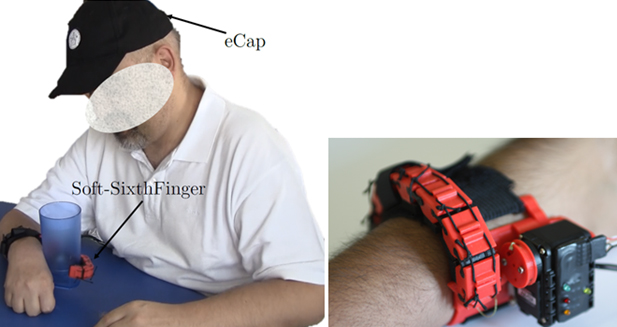 Fig. 1. The Soft-SixthFinger. Ecap, wirele The robotic extra-finger works with the paretic limb to compensate for hand grasp functionality. The patient can control the device thanks to a wearable EMG interface embedded in a cap called eCapss EMG control interface for soft sixthfinger. The device can be wrapped as bracelet when being not used.

Fig. 2. Examples of ADL Bi-manual tasks From the top left, clockwise: unscrew a jar, open a can, squeeze a toothpaste tube and open a squared can.

Our work presented in [9-10], won the Best Demonstration Award at symposium (HAPTICS), Philadelphia, USA, 2016. We proposed hRing to control the Soft- SixthFinger (SSF) and to render haptic informations to provide cutaneous stimuli. The hRing is a novel wearable cutaneous device for the proximal finger phalanx, see Fig 3. A video is available here.

Fig. 3. The hRing as haptic and control interface for Soft-SixthFinger.

We proposed to use a robotic the Robotic Sixth Finger together with the paretic hand/arm, to constrain the motion of the object. The device can be worn on the user’s forearm by means of an elastic band. The systems acts like a two-finger gripper, where one finger is represented by the Robotic Sixth Finger, while the other by the patient’s paretic limb. The patient can regulate the finger flexion/extension through a wearable switch embedded in a ring worn on the healthy hand. Two possible predefined motions can be chosen to obtain either a precision or a power grasp. In addition to the switch, the proposed ring interface also embeds a vibrotactile motor able to provide the patient with information about the force exerted by the device. The preliminary results with patients are presented in [5]. A video is available here. 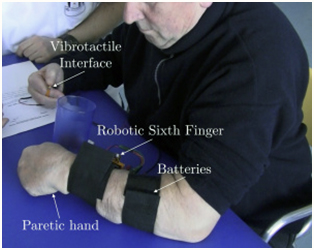 In [9] we introduced an EMG interface to control the finger flexion/extension as well as a compliance control to let the finger adapts to the shape of the grasped object.

Fig. 5. On the left, the EMG electrodes are placed on the patient forehead. On the right EMG board interface with exra robotic finger.

We started to investigate how to enhance the capability of the human hand by means of wearable robots in 2011 [1]. The goal was to integrate the human hand with an additional robotic finger as represented in Fig. 6.

Fig. 6. The Robotic Sixth Finger concept. The device is worn like a bracelet and pops up when needed.

We firstly investigate the potentials of extra-finger in healthy subjects. Such devices could give humans the possibility to manipulate objects in a more efficient way, enhancing our hand grasping dexterity/ability. The first prototype has been presented in [2] together with several examples of the extra-finger applications. Together with the design issues related to portability and wearability of the devices, another critical aspect was integrating the motion of the extra–fingers with that of the human hand. In [3], we presented a mapping algorithm able to transfer to the extra–fingers a part or the whole motion of the human hand. A commercial dataglove was used to measure the hand configuration during a grasping task. A video is available here.

Although this control approach guarantees a reliable tracking of the human hand, there was two main drawbacks to be solved. First, the user lacked a feedback of the robotic finger status and could only perceive the force exerted by the device mediated by the grasped object. The second problem was related to the approaching phase of the grasp. In fact, the algorithm presented in [3] considers the motion of the whole hand to compute the motion of the extra finger, thus limiting the possibility of the user to make fine adjustments to adapt the finger shape to that of the grasped object. In [4] we addressed these issues by introducing a vibrotactile interface that can be worn as a ring. The human user receives information through the vibrotactile interface about the robotic finger status in terms of contact/no contact with the grasped object and in terms of force exerted by the device. Regarding the grasp approaching phase, we introduced a new control strategy that enables the finger to autonomously adapt to the shape of the grasped object. 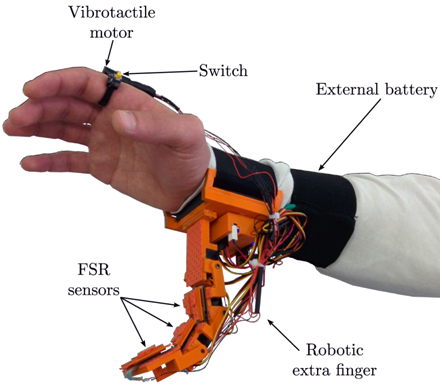 Fig. 7. The Robotic Sixth Finger together with the vibrotactile interface ring.

The experience gained with healthy subjects was fundamental for the development of Robotic Sixth Finger for compensating hand function in chronic stroke patients.

Thanks to all the subjects and friends who are testing our devices. _DP and the #sirslab team